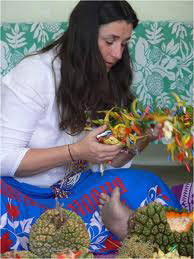 It is not as through there are hundreds of fragrance artists, but there are some, and the passing of Sandrine Videault is a great loss to that small group.

Videault was a kind of anthropologist. She was born and lived on the impossibly beautiful tropical island of New Caledonia. In an interview with Perfume Shrine's Elena Vosnaki, she spoke of the indigenous tribe there, the Wallisians, who frequently rub perfumed pastes into their skin. She included some of their ingredients — Frangea, a white flower, sandalwood, Javanese vetiver — in her 2009 fragrance Manoumalia. She left some things the Wallisians used out, though;  most notably the hea seed, which she called “too rancid for the Western nose.”

So, we can see that Videault did assemble a perfume, not a reconstruction. A fragrance to be worn by Westerners on skin, to enhance, to make more beautiful, the wearer’s day. Is this art? I think it is.

So often, written descriptions of “olfactory art” seem kind of silly to me. It could be that all forms of  conceptual art have that in common. Perhaps they are better by far observed, or participated in, than read about. Videault composed olfactory art pieces as well as fragrances. Among them were an olfactory “happening” which included releases of metallic bubbles, presumably containing scent to be released when the bubbles burst, and “The Song of Senses,” an olfactory theatre with holograms. Both, I’d like to have seen.

Manoumalia, which I still have a drop of and am wearing as I write this, was a participant-observer fragrance, to use field-anthropology jargon. A student of the great perfumer Edmound Roudnitska, Videault knew how to construct a fragrance using naturals and synthetics, so although it references the Wallisians Tui-Tui fragrant paste, it is not the same thing.  Smelling the fragrance in its initial stages and in drydown, I perceive the unmistakable white flower essence, a little bit of rubber (common to tuberose) , a slight peppery quality in the middle, and the drydown just a hint of root and indole. On my skin, the fragrance is fleeting.

I was happy that Sandrine Videault existed. I was waiting for more fascinating ideas and fragrances to come from her. But, like the Italian fragrance innovator Mona di Orio, she didn’t live long enough.

When asked by Vosnaki what one thing she’d learned from Edmound Rodniska, she replied it was that “we know nothing.”

That is a succinct description, the beginning, of inspiration.

Photo of Sandrine Videault courtesy of Google Images. Image may be subject to copyright.

Thanks to Scented Salamander for some of the material here.

Thanks to Vanessa for giving me the head's up that you're blogging again (not sure though why you're not coming up on my feed - I'm going to have to fix that!)