YSL by DSH: A Perfume Look at Yves St. Laurent 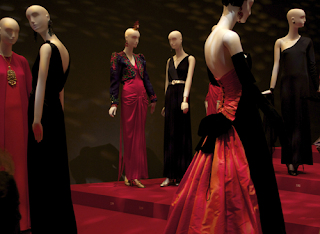 I’m always happy to get a samples package from Dawn Spencer Hurwitz. I admire her sure hand. I know that the scents won’t be oily headshop concoctions, but real perfumes, as beautifully crafted as the most expensive ones, but with better ingredients. I had read about the YSL Retrospective Collection, so was thrilled to get a chance to try them.

Last week, I was doing a lot of research on Andy Warhol, for another project. When struggling with the concept of talent — is there such a thing, or is it just work? — it was learning about Warhol’s upbringing as a poor kid from a lower-class ethnic ghetto in Pittsburgh that finally pushed me to conclude that these abilities can be inborn.

It occurred to me as I was looking into YSL that Yves St. Laurent’s position in the history of fashion was similar. He  was from a comparatively  elevated but certainly not extraordinary background, born in a small town in colonial Algeria. Both he and Warhol showed early talent. Both rose quickly. Both became giants, suffered health problems, and died relatively young.

St. Laurent popularized pants for women, even as formal wear. He was the first to use models of African descent. He attempted street fashion at a time when his clientele wouldn’t dream of wearing anything so downscale as, say, leather. He made oceans of money with his Ready-to-Wear line — also simply not done at the time — and introduced Opium perfume with scandalous images and an infamous launch event. When I look back through images of his collections I can see that most of us wore his ideas, in one way or another, even if they came in liquid form.

What Dawn Spencer Hurwitz has done is make fragrant tributes to St. Laurent’s most important, and most creative, chapters. She did this to coincide with the Denver Art Museum’s YSL Retrospective Exhibit, in which St. Laurent’s couture pieces are shown as what they were: art. 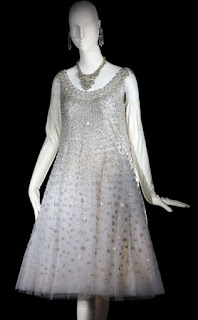 Yves St. Laurent became Art Director at Dior when he was only twenty-one. His first collection for the house was “Le Ligne Trapéze.”  Hurwitz writes that she was inspired by a gorgeous silver evening gown from that collection:  "Trapeze.”
The fragrance is a cool aldehydic floral with a decidedly vintage feel. For me it occupies a space somewhere between Mitsouko (the peach skin) and Arpege (the aldehydes). The silver here is not of the “sucked silver spoon” variety, but more a concept of the color and patina of well-used sterling. It’s a slightly aloof bouquet that warms to the skin over time. Included in the notes are aldehydes, of course, and violet, but also jasmine, “suede” accord, vetiver and castoreum. 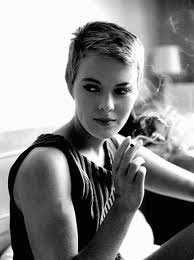 One of my favorite old films is “a Bout de soufflé,” known in English as “Breathless.” Even now, it feels modern, still full of insouciance. Likewise this perfume, with its fruit and flowers, (not “fruity floral,” perish the thought!) underscored by leather. St. Laurent, like many of his countrymen, was fascinated with American motorcycle/beat culture at the time. This collection, for Dior, featured items like leather jackets and turtlenecks, and did not go over so well at Dior. St. Laurent left Dior after this, to fulfill his military service obligations. That didn’t go well either. He was hazed and taunted until he suffered a breakdown. After being released from service, he returned to Paris and started his own house.

This is my personal favorite from this collection. Notes include mirabelle plum, jasmine, orris, honeysuckle and leather.  The photo is Jean Seaberg, taken on the set of “a Bout de soufflé.” 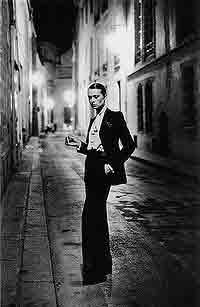 “Le Smoking” was a YSL shorthand for the tuxedo, worn as evening dress by women. This was St. Laurent at his finest: daring, inspired by the women’s liberation movement of the time. Formal dress before this required horrors like “merry widow” corsets,  girdles and other forms of armor. The very idea of being able to sit comfortably at a formal dinner seemed revolutionary.

“Le Smoking” is called a green chypre here, but what I sense is warmth; a beautifully green-floral beginning which settles into honey and tobacco leaves.  What makes this one so appealing are the bases, so well-blended that you get a feeling of incense, oakmoss and a bit of castoreum, but no aspirants and no scene-stealers.

The photo, by Helmut Newton, from Google Images. 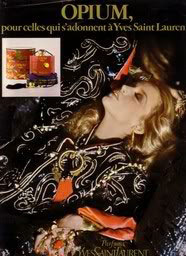 Opium perfume was iconic. Everybody wore it. The print ads featured Jerry Hall, Mick Jagger’s paramour and incredibly fabulous supermodel, reclining in a stupor on brocade cushions. For a couple of years every office and nightclub was filled women apparently aspiring to be that kind of  femme fatale. Opium was so ubiquitous, and so immediately recognizable that, like one of Warhol’s repeating disaster images, it ultimately lost its power.
This is a modern take on the idea of “Opium.” Clear, not murky. Conscious, not stuporous. The orange, carnation and clove bring up the Oriental association, but this is a bit more mannerly, with rose in the drydown. Don’t confuse it with the travesty currently being sold as “modern Opium” though! This one will elicit memories of the original formula, while being much more wearable.

The Opium ad came from French Vogue by way of Google Images. 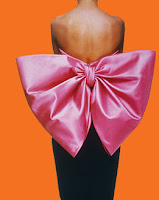 This is similar to “Paris,” the perfume St. Laurent said inspired the big-bow dress, but without the slap-you-stupid 80’s gigantism. Truth be told, I have always found “Paris” to be difficult to wear, but I also found huge shoulder pads to be daunting.  This is like “Paris,” minus the over-the-top quality. It has an aldehydic fizziness “Paris” didn’t have. It is still very much in the rose-violet camp, though. Notes include French rose, violet, violet leaf, cassis and civet.

The photo comes from the Denver Art Museum’s publicity materials for the retrospective. 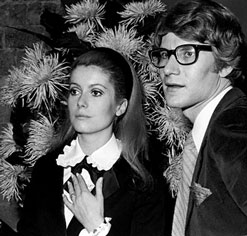 At his last haute couture show, Catherine Deneuve sang this song to him. By this time, St. Laurent was in failing health, barely able to walk down the runway after the show. He retired to Morocco soon afterward. This event highlighted his immense influence in haute couture, especially upon taste-making, powerful women. The fragrance is a ladies-who-lunch ozonic floral with one of the most beautiful jasmine-laced drydowns I’ve ever experienced in a perfume.

Yves St. Laurent dressed Catherine Deneuve for “Belle De Jour,” during which they became lifelong friends. Her appearance in that film is iconic; the classic, simple clothing, blonde mane, heavy Sixties eye makeup, stiff white lingerie.  To me, this fragrance is about her, in that film and later, as one of his great muses. Some of the notes here are linden, wisteria, sambac jasmine and ozone, all to great effect, romantic and wearable anywhere.

The photo is Catherine Deneuve and and Yves St. Laurent on the set of “Belle de Jour.”

The best thing about blogging is the learning. Before I began my research for this post, I knew a little  about Yves St. Laurent; he’d done Opium, the safari look and so on. I now know a lot more. I have never been a haute couture customer, but I’ve worn tuxedo jackets, safari-like shirts, pantsuits, brocaded jackets and Opium. Except for the last, I had no idea that it was Yves St. Laurent who came up with all of them.

For more information, prices and a complete listing of the “notes” of each fragrance, visit www.DSHPerfumes.com.

Photo crédits: Le Ligne Trapeze dress: http://collections.vam.ac.uk/item/016821. Photo of Jean Seburg from pagesdigital.com. Photo of Catherine Deneuve and Yves St. Laurent from http://blogue.us/wp-content/uploads/2010/11/catherine-deneuve-belle-de-jour.jpg. Other photos are credited in the text.

These are all so nicely done! La Vie en Rose is my current favorite, and I too think the original Paris is really hard to wear/take.

Hi Elisa -- I agree about these. I think they're all excellent.

Excellent! You have created a lemming.
Portia xx

What a stunning review! Yves St. Laurent was a genuis, and you did wonderfully by him (and Dawn Spencer Hurwitz).

Definitely must try these beauties.

Thank you for the great read (and reference).

Hi Portia -- Thinking I just might be one, too.

Hi TaffyJ -- Yes, he was. I wish this retrospective would make more stops -- my home town, for example!

A really beautiful post, I enjoyed it. Did you come across Alicia Drake's book ("The Beautiful Fall") about YSL and Lagerfeld in the seventies? She must have done a good deal of research and the result is sort of touching and revealing.

Hi Blacknall -- I'll look for it. Not much downloadable stuff available, I found -- not everything's on Kindle! I may try the library.

Love this series. I think it's brilliant to do commentary through perfume in this way.