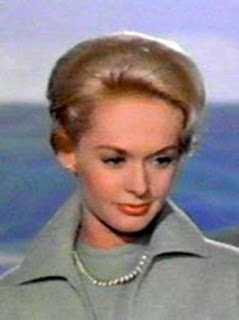 The kind people at PureDistance Master Perfumes have honored me with a full bottle to give away to one lucky reader!  Leave a comment by midnight, April 4, U.S. Eastern Daylight Time. I’ll chose one commenter, using random.org, and announce the winner by 9:00 a.m. on Tuesday, April 5th.
At my first sniff of “PureDistance 1,” I thought “Hitchcock blonde.”
The great film director Alfred Hitchcock was obsessed with the kind of cool, sophisticated blonde whose calm demeanor hid...well...a lot. There were many -- Grace Kelly, Eva Marie Saint, Kim Novak -- but the best personification of the Hitchcock blonde has always been, to me at least, Tippi Hedren, as the secretive socialite Melanie Daniels in “The Birds.”
“PureDistance” is a green floral perfume that starts out in the cool spectrum and ends up warm and a little musky, but never loses its aplomb. Released in late 2008, it was the first perfume from Vienna-based PureDistance. The perfumer, Annie Buzantian of Firmenich, has said in interviews that this was the one she would have made for herself, and that her fragrances tend to be “joyful, with a very fluid signature”(Osmoz, 2008.) Romanian by birth, American by choice, she is a Lifetime Achievement Award winner -- American Society of Perfumers, 2003 -- and her other creations include Estee Lauder’s “Sensuous” and Ralph Lauren’s “Pure Turquoise.”
My guess is that Buzantian jumped at a chance to create something as high-end as this, without the common denominator constraints of the mass market. There is nothing common about this fragrance. It is, like a Hitchcock blonde, a little secretive. It doesn’t stray much. It announces its presence quietly, but isn’t afraid to stay late.
The initial reviews for “PureDistance 1” were glowing, but the mention of a slightly watery, slightly ozonic top note scared some of the original commenters. I personally dislike ozonic florals. This scent has nothing in common with that unfortunate 90’s fad. It opens with a slight, warm citrus, and a subtle floral note, meandering through magnolia, mimosa, and a little bit of rose. It finishes with a warm amber and white musk.
This scent is subtle. It’s very much a close-to-the-skin fragrance, but it never gets sharp or powdery. If you’re looking for a va-va-voom “Here I Am, World!” fragrance, this one probably isn’t for you. It’s Alfred Hitchcock’s Melanie Daniels, not, say, reality TV’s Snooki -- actually, it’s about as far away from Snooki as a perfume can get, and for that, I am grateful.
“PureDistance 1” is extrait strength, at 32% perfume oils. The bottle holds 17.5 mls, quite generous for a niche extrait.
I’ll be very happy for whoever wins this!
Disclosure time: The bottle of “PureDistance1,” and a sample for me to use for review, were given to me by PureDistance Master Perfumes.
The photo of Tippi Hedren as Melanie Daniels is a taken from the Hitchcock film “The Birds.”
“Notes” for “PureDistance 1” include tangerine blossom, cassis, neroli bigarade, magnolia, rose wardia (a trademarked Firmenich composition), jasmine, natural mimosa, sweet amber, vetiver and musk.
To enter the drawing, click on the word “Comments” at the bottom, just above the “Labels” statement, and a comment screen will open. If you comment as “anonymous,” make sure there’s a name there somewhere, so I can identify you if you win!
Posted by Olfacta at 12:01 AM

Oh my goodness, this sounds right up my alley - even though I'm a brunette! :) Thanks for entering me.

Well, I'm certainly in to try this one. Thanks for the awesome drawing!

I'm so excited with this giveaway! I would love to try this fragrance. I have read a lot about Puredistance lately and this scent seems to be perfect for Spring.
I love all its notes!

Very cool drawing, thanks so much!

Ooh! Magnolia and amber on a musk base? This is for ME!! :) Fingers crossed!

PureDistance! What better scent for an Ultrarunner!

I cannot ignore suchan exclusive offer, pls enter me in the drawing, many thanks Alica - alica@cleis.net

I'd love a chance to win such a delight! Please enter me in this lovely draw and thank you!

"...about as far away from Snooki as a perfume can get" sounds perfect to me. Do please enter me into the draw for this elegant green floral treasure. Thank you.

I would love to be in the drawing. Thanks for the wonderful opportunity.

ooh ooh me me.... this one seems to be mentioned alot lately and every review I read makes me want to try it more =)

How exciting! I've read a lot of great things about this. Fingers crossed that I get to see what all the fuss is about.

Wow, Thanks for the contest!

Thank you for a fantastic drawing!
I want to win this... it sounds like me. I am not a blond and nearly not as beautiful as the picture you posted, but there always were many people in my life who were fooled by my calm and comforting appearance and were surprised to see everything else that came underneath...

Me! Me! Enter me!
Thanks, Rebecca

I have a sample of this -- definitely wouldn't call it ozonic. Please enter me in the draw!

I enjoy reading your blog. Please enter me in the draw.
Thanks,
O. Anne

I would love to try this, I'm a huge fan of EL Sensuous, it's one of my all-time favorites.

A subtle perfume...sounds just what would please me as much as my husband.
Please enter me. Thank you.

"The Birds" scared the bejinkers out of me as a young lass! Shudders.

I'd very much like to put some PureDistance in between my memories of it and now, so please include me in the draw.

Many thanks, and I'll stop jumping at shadows in a minute ... that Hitchcock fellow really messed with his audience's heads!

Please enter me in the draw it sounds like a perfect spring fragrance.

I would love to enter the drawing. I got to try a sample of Antonia & loved it,.

I would love to be entered. It sounds marvelous.

Please Put Me In The Drawing!

It sounds lovely in spite of the scary ozone note! Please enter me into the drawing.

I have read wonderful reviews and would love to try. Please enter me in the drawing.

I'm not a blond, but would love to try this fragrance. It sounds lovely for spring and summer. Please do enter me in the drawing.

Beautiful review of what sounds like a beautiful fragrance! Please enter me in the draw - thanks!!

Have yet to read a less than positive review of this one. I'd love to enter the draw. Thanks!

I thought I would like Antonia more, but the more I compare the two, I do think I like Puredistance I better. It's pretty classy. Would love to be in the draw.

I would love to be included in the draw. I have had the opportunity to sample all three Puredistance perfumes, and they are all very lovely, but Puredistance I is by far my favorite. These perfumes are expensive, but they are so exquisite and of such high quality, it is like wearing a magic elixir. Thank you for this lovely opportunity.
Sincerely, Sharyl

Please, enter me into the draw. I haven't tried any of this line's perfumes but plan on doing it eventually.

Just putting together the faces and the pieces and realized who you are ;0)

Love the writing; would love to try this; thanks so much for the chance! Now to spend some of my precious free time reading more of your blog...

I love Puredistance. All 3 of 'em. I cannot afford these perfumes right now so winning a drawing might be the only chance I will ever get to bask in one. Thanks for the drawing and your fume reviews which I often frequent when I am procrastinating on writing a paper. Like now.
pegrysan@yahoo.com

Ohh. What an unbelievable giveaway. I loved Antonia enough to put it on my birthday wish list (early summer! will be perfect) and sampled 1 and M just to be blown by both of them as well. Please enter me in the draw!

I have Puredistance 1 myself so no need to put me in the draw, thanks, not least because I have already won your giveaways twice before, so it must be somebody else's turn! I like this one a lot but it is a a big hitter on my skin, overtly perfumey / musky and not subtle at all. There is no accounting for skin, as they say! :- )

Please enter me in the drawing!I would love to try this.I love Pure Turquoise.

Please enter my name for this drawing, I've been able only to test M and is amazing, I'd love to win this one.

Wow, what a drawing! Please enter me. I've never tried any of this line.

I tried Antonia before and is simply beautiful, I'd love to get this bottle. Thanks for this amazing drawing!

What a wonderful drawing! Thanks!

I'd love the chance to win this! Thanks so much...

I've tried Antonia and M and just let me tell you that thank God for niche houses like this one that are just quality and make perfumery an art form by itself.

Thanks for the opportunity to win! : )

Oh please enter my name in this draw, Puredistance is getting nothing but glowing reviews all accross the net.
robertocrisanto@yahoo.com

Thanks for this generous opportunity) gustav69@mail.ru

Yes, please enter me for the draw! I got a sample of this yesterday, and it's wonderful. Approachable but not banal, fresh and crisp without being sharp or shrill, cool and warm at the same time. It's perfect till the last trace of drydown. johanse.johansson@gmail.com

I love your description of the perfume as a "Hitchcock blonde." It was said that Hitchcock totally creeped Tippi out! What a beautiful picture of her to illustrate your column.

Please enter me in the drawer. PureDistance 1 sounds lovely.

I have a small sample of this and I love it! Please enter me into the drawing. I was Melanie Daniels for Halloween one year, and April 4 will be my birthday! What a great drawing.

I'm far away from a blonde but would LOVE to try this- I've heard so many good things about it! Please enter me in the draw!