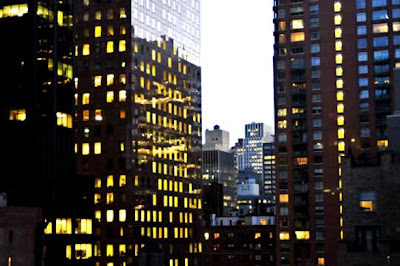 So there we were, packed into yet another room. The weather had warmed and my clothes were all wrong, and my boots, all wrong, and the hotel was five blocks, and so I bailed after lunch. Bailed on Bendel and Anna Sui and something at the Plaza. I knew I’d miss out on the product presentations, but I wouldn’t call that a tragedy. The experience at Bergdorf’s had been enough for one day.
I started this blog as a way to write about something that interested me. I suppose product is product and marketing, marketing, but I’ve seen so many parallels between this business and my former one (music) that I can’t help but notice. For example: Chanel. Anyone who reads these perfume blogs and forums knows that their newish men’s fragrance, Bleu, has been pretty universally panned on them as boring and ordinary and not up to sniff, er, snuff. But here’s a lady from Chanel up there shouting Bleu’s virtues as if none of us had ever tried it! I came away thinking that she’d never even read a perfume blog, or, if she had, probably dissed the writers as a bunch of insignificant hobbyists as opposed to real pulp ‘n paper critics with real columns in real magazines. It was like the year that NARAS, moribund and woefully out of touch, gave the first-ever Grammy award for “Best Heavy Metal Album” to Jethro Tull.
Wake up.
I liked the next day better because, let’s face it, I’m more downtown than up. Bond No. 9  gave us an enviable reception and, even better, a bag full of their colorfully wrapped “bon bon” samples, all warm ‘n fuzzy; an antidote, maybe, to their take-no-prisoners attempt to defeat an indie perfumer by trying to own a common noun as a perfume name? If so, well, at least somebody’s alarm clock went off that day. MiN; a store selling upscale scents like Miller Harris and Amouage, that looked like an old fashioned apothecary -- great idea! -- and serving unusual scented teas. Crowded, though, no room to take notes, and so I don’t remember the particulars of the scents I tried -- another reason to give samples; same with Le Labo, the next stop. Great stuff, insane prices, no samples. Somewhere there exists a perfume fan who can sniff 40 or 50 fragrances from paper strips or instore bottles and remember the names and the details a week later, but, unfortunately, it’s not me.
So I left Sniffa, intending to go back later for the ending festivities at Aedes de Venustas, but had the ultimate New York experience instead: we were standing under the arch at Washington Square when Mr. Olfacta realized he had left his iPhone in the cab. Lucky for us, we’d met author Avery Gilbert there, who had the presence of mind to suggest that we call the phone. The cabbie answered it, and, after two hours of repeated calling, begging, missed meeting places and offers of baksheesh we got the damned thing back. The whole experience was, well, a little stressful, you might say, and I’d missed the closing reception. So the three of us went to McSorley’s Ale House -- the oldest tavern still in business in Manhattan -- and then to dinner, and then just walking, talking, walking, all things I love in New York.
So here’s my take on Sniffapalooza Fall Ball 2010. It was a good reason to go to New York. If you have a fragrance business, as my Sniffa companions did, it’s important that you smell everything. But I’m wondering if the reps from the established perfume companies saw us as annoying, rabid freebie hounds; certainly, they weren’t offering many samples. I think they were holding out for bottle purchases, especially at Bergdorf’s, where I couldn’t help but notice a very worried-looking floor manager checking cash registers as we waited…and waited...and waited for a raffle and the next event; waited until every possible sale was made, the raffle an effective way to keep us in the store.
Luckily, I had the very smart and generous Carol smoothing my path, and Avery to hang with later, and the Captain, and the DH and well, I had a great time. Met some really interesting people. Had one of the best art experiences of my life at the MOMA Abstract Expressionist New York show. Fell back in love with New York. So, in separating the two, the City wins. I’ll go back in a heartbeat (when the bank account recovers from this all-out assault.) But I think the established fragrance companies need to take their most frantic fans more seriously than I saw them doing at this event. Think of this: for the cost of a trip to NYC, I could have bought ten bottles. At this Sniffa, I got the distinct feeling that that’s what the Chanels and Guerlains and their ilk would have preferred that I do. That’s shortsighted, and a shame.
Photo © Keith M. Borow, all rights reserved.
Posted by Olfacta at 9:54 AM

Wow, too funny about the Chanel rep trying to flog Bleu, when they have the Les Exclusif line that we actually like, now available (some) in a new bottle size. After Chanel hosted half-day workshops for us in NYC several years ago, with one of their top educators at the helm, I thought Chanel might be starting to "get" the perfumista community! Of course, then they stealth-launched Beige, with no marketing communication at all to the bloggers that they had just graciously welcomed, and I realized, nope, they are still clueless.

Another "no samples" story: I just recalled a visit to a specialty perfume shop in Italy on a Sniffapalooza trip a few years ago, when the befuddled SA making a presentation to us on a niche line, started spraying tester bottles in the air, and trying to waft the scent to us with her hands. LOL! We quickly stopped her, and suggested passing around scent strips instead ;)

Maybe the Karen's could give out an essay describing the typical Sniffa attendee/uberconsumer (or print out some blog posts) and ask all reps & store managers to read them, before they are allowed to present to us at a future event! They could explain how to make sales to us _after_ the event, by giving us samples, business cards, free shipping incentives, etc. Repeat every Spring & Fall...

Hi ggs -- In all fairness, they did present the new smaller-size Exclusifs. Big companies just tend to drag their feet. Remember when Microsoft was nimble and cool? Now they're IBM.

I found this next episode in your no-holds-barred account of Sniffa fascinating, and am glad you got Mr Olfacta's phone back!

I also think the reluctance to give out samples is shortsighted, having read a statistic in a Mintel report saying that 69% of women are motivated to buy a FB following the acquisition of a sample.

Hi Vanessa -- I guess my conclusion would be that everybody's hurting right now, including the perfume companies -- but reluctance to crack open a bottle or two for samples speaks loudly. Interesting that Chanel did those workshops a few years ago, as ggs mentioned. Of course, everybody's coffers were fuller then, and "experimental" programs tend to get dumped faster when times are bad. Or perhaps Sniffa just isn't all that important to them.

What an astute observation re: the parallels between the old-school side of the music business and perfume. It takes a freighter a lot longer to change course than a speedboat, and I guess these behemoth companies are still doing things the old-fashioned way, while getting their butts kicked by the independent perfumers!

Great report - thank you for sharing! It's gratifying to hear perfume manufacturers are worried. Maybe it'll occur to them to start making quality products again. I want my Fendis back - and no cheating with cheap ingredients...I'll know!

Yes, the marketing aspect so early in the morning is a bit much for me too. And it's hard to take in so many things at once. But, you do get exposure to tons of things might otherwise not get to...

I am so sorry I missed you, I wish I had met you!