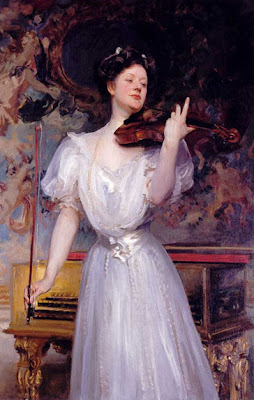 My first sniff of “La Rose Jacqueminot” was from a sample vial. Few perfumes have surprised me as much as this one did. It smelled so modern. I had been expecting, oh, something ghastly-sweet, old-fashioned and of its time. This, instead, smelled timeless.
La Rose Jacqueminot was the perfume that the young Francois Coty threw his famous tantrum over, after an unsuccessful attempt to sell it to the Parisian department store Le Grands Magasins du Louvre. He smashed the bottle on the floor, drawing a crowd of women demanding some for themselves. (By some accounts, there may have been some hired frenzy-starters in the crowd.) In this unlikely but imaginative way, the Coty company was launched.
Nice story. I’m more inclined to believe it now than I used to be.
The bottle I have looks like it’s from the early Eighties. There’s a bar code on the bottom flap of the box, which is made of soft paperboard with slightly embossed printing. The “Div. Of Pfizer” sticker on the bottom means it was manufactured sometime between 1963 and 1992.


Obviously, this is a rose fragrance, and there are violets, and maybe a bit of carnation; hints of green and spice and, definitely, some civet in the base. I don’t smell any “old aldehydes” here, either, but the bottle came from Alaska, so perhaps wasn’t exposed to much heat. The scent, though, is less about “notes” than about a feeling, a gestalt.
When I received this last week and immediately applied some, at first I thought I’d been duped. It seemed too subtle for an eau de parfum, and I wondered if the seller had diluted it. I was busy, though, and went on with my to-do’s. A short while later, I became aware of the most wonderful floral haze surrounding me. I felt like I was walking inside a rose-scented cloud. The perfume had bloomed, and now it was flowing all around me.
I’ve tried so many perfumes, hundreds and hundreds, some with no sillage, some with way too much, but this particular effect was new to me. I thought of two other perfumes I’ve sampled, YSL’s (vintage) Paris and Rosine’s La Rose, both of which are rose/violet powerhouses. I’ve smelled ionone, the synthetic violet aromachemical, from my perfume notes kit, and violet soliflores, and rose attars, soliflores and absolutes, and all kinds of rose-based perfumes, and there are not many I like this well.
How this stealth blooming quality was achieved, I have no idea. There is little information available on this scent. My bottle is probably between 25 and 30 years old. The rise-up-and-envelop action happens whether the scent is dabbed or sprayed. And it lasts, for hours.
This won’t be one of those the-past-was-better laments, because there are lots of great rose-based perfumes out there, vintage and modern -- (most of) the Les Parfums de Rosine line, many niche specialties featuring rose and vintage treasures like L’Arte de Gucci. I was merely curious about this one, until I smelled it. And realized that it could be more than a relic. Back and forth I vacillated, the usual fleabay dilemma, but when a fairly reasonable bottle showed up, I grabbed it. Now I feel like I own a piece of history. Best of all, it’s a wearable one!
Do you have a favorite rose perfume? What is it? Leave a comment by midnight, Monday, Dec. 6th, U.S. Eastern Standard Time. I’ll do a drawing and send the winner a sample of La Rose Jacqueminot.
The painting, by John Singer Sargent, was done in 1904, the year La Rose Jacqueminot was (by most accounts) released. Titled “Lady Speyer,” the portrait’s subject was Eleanora Speyer, daughter of a Prussian noble who fought in the Civil War. She shared superficialities with most of Sargent’s wealthy clients, but was very accomplished on her own. She was a virtuoso professional violinist and a Pulitizer Prize-winning poet who only began writing after her children were born.
La Rose Jacqueminot shows up occasionally on auction sites. The prices vary, but it’s generally $2 to $3/ml, sometimes more. Some sample and decant sellers on the perfume forums have it, too.
Thanks to the website "Cleopatra's Boudoir" for providing information about the scent and its history.
Posted by Olfacta at 12:01 AM

My favourite rose so far is still Lyric (although that one is so much more than a rose). :) A close second is Paestum Rose.

BUT if I have to pick my favourite - oh I just can't! Sorry!

I am only beginning to dip my toe into the rose pool, so I don't really have a favorite rose perfume per se, but I did buy some Bulgarian Rose Otto recently and added a few drops to some witch hazel as a skin freshener. I look forward to inhaling that rosy scent every morning and evening!

L'eau Rose by agnes b. It is the loveliest refreshing sparkling rose and lemon concoction I have had the pleasure to wear, and it never fails to lift my spirits.

Hi Ines -- Umm, Lyric. I have that one too. It's perfect in winter, so rich. The other one I haven't tried yet.

Hi BF -- I've been meaning to try the Diptyque. And the SL. Off to the "order samples" list.

Hi QC -- I have some rose attar, and have been meaning to experiment with diluting it. It has a flat, sort of bean-like aspect that I'm not too fond of. The witch hazel is a great idea.

I haven't tried that, is local and/or niche or botanical? I' ve tried Rosine's Zeste de Rose, a rose-citrus mix, but it doesn't last long on my skin...does this one have longevity?

Yes, the rose otto doesn't seem too interesting in the bottle. Add it to some carrier oil (like jojoba) with a wee drop of sandalwood or patchouli and it blooms!

Wonderful review! I've read that the daughters of Tsar Nicholas II were loyal to Coty fragrances. Tatiana favored "Jasmine de Corse", Marie chose "Lilas Blanc", Anastasia liked "Violette Pourpre"... and Olga preferred something called "Rose Thé" which I've been unable to link to Coty at all. I wonder if it was really La Rose Jacqueminot! (I've seen a photograph of a pre-WWI-era Coty deluxe coffret which included all of the above fragrances; I wonder if it is the same one from which the Grand Duchesses selected their favorites...)

I'm mad about rose perfumes lately and I love many of them but I'm still in the search of my Holy Grail.

If I have to pick one I would say Parfums de Rosine Écume de rose :) I love the vetiver on it.

L'eau Rose was one of the agnes b range available through the Club des Créateurs de Beauté here in the UK back in the late 90s/early 00s. The Club ceased operating in the UK, which is a pity, but it is still going in France, Germany and Japan, according to a web-search.

This L'eau Rose really lasts, and it is lovely. (My precious!)

My favorite rose is YSL Paris - love the rose in combo with the violet.

Like Queen Cupcake above, I've only begun to "dip my toe into the rose pool"; I never liked the scent of actual roses, and many rose fragrances seemed to represent that scent too literally and too aggressively. BUT-- recent exploring has discovered some rose perfumes for me to love. Bois de Paradis is my favorite: rose and spiced wine beside a bonfire in a magical wood.
I love your description of la Rose Jacqueminot and hope to try some.
-- Gretchen

I read about this in the Chanel No.5 book they just released. Where did you read the broken bottle accounts, Olfacta?

No need to include me in the draw, because I sprung for a small 10ml bottle on ebay a few months ago. I haven't worn it yet, because... well, because...

I have no excuse, really. Except that There's So Much To Sniff.

The topnotes on my bottle are damaged - it's that decayed-aldehydes-and-bergamot thing that goes all nail-polishy. Which usually I don't mind; I'm a patient person. But it was fall. I wanted spice. Woods. Voluptuous sweater-weight things, not clouds of roses.

Your review has made me lust for the clouds of roses. (Vtg No. 5 parfum does that enveloping cloud thing on me, and it is just stunning.)

COTY Paris, of which I have a small decant, was a lovely rose-violet thing too, a perfect "handkerchief scent." Those old Cotys... ah.

Oh, I do have some Coty Paris--I will have to give it another sniff or two. I hadn't remembered it was a rose-violet fragrance. Like museinwoodenshoes, I love those old Cotys. I am wearing Sonoma Scent Studio's Cameo--very rosy! I wasn't sure about it at first, but am liking it more now that it's been on my skin for a couple of hours.

Hi all (losing track of who said what) -- I always thought I dislike rose scents until I got heavily into perfume; then I realized that it was rose soliflores that I had a problem with! Rose mixes, I loved, and that's still true.

I have a little vintage Paris here, which came as part of a set. Haven't tried it yet, because I've had a bad cold this last week. We shall see!

I love the old Cotys too. I guess I'm on my way to collecting them. And the story about the smashed bottle pops up everywhere when researching Coty. Who knows if it's really true? Such a good story; who cares?

I love that 'smashed bottle' story! Like the first rave!

Yeah, I liked that one too. Very leathery leather. Her whole line is interesting!

Sonoma Scents Velvet Rose is my favorite rose soliflore. I grow roses, and this is the most realistic rose scent I've ever found.