Off the Cuff -- Nuit de Tubereuse 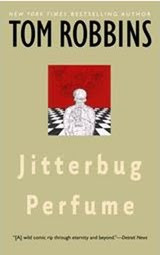 “Reluctantly, Pan lowered his big monkey lids, whereupon Kudra doused him with enough patchouli to stampede a herd of elephants. His eyes flew open like the hatch covers on an exploding ship, and he commenced to sniff at his extremities, as if he were wildly in love with himself. A kind of disorientation seemed to seize him, causing him to walk in circles, repeatedly crossing his own path….”
And then he speaks:  “ ‘Tis true, thou homers do have a magic of their own, the gods have always known that, known it even better than thee….Sniff sniff.”
These lines come from “Jitterbug Perfume,” by Tom Robbins, published in 1984. (Incidentally, the gods here refer to humans as “homers” as an insult to Homer, who dared hold the comical belief that we might share certain traits with them.) I’m about halfway through the book.
For some reason, I thought I’d read this book before. I remember Robbins as a sort of stoner writer, like George Carlin as a stoner comic or, forgive me, Cheech and Chong (but c'mon, admit it:  they were funny in certain circumstances.) Like Robert Crumb, the cartoonist, whose work is just now beginning to be appreciated properly. Like Big Daddy Ed Roth, whose Kalifornia-kar-kulture Rant Fink icon portended lowbrow art by decades. And, like, you know, and so on from the decades of Vaguely Remember.
But I don’t think I actually read it. Maybe I just hallucina thought that I did.
Anyway, this isn’t a book review, because I haven’t finished the book. (Not that that matters to some book reviewers.) It does to me, because I don’t know how it ends. Fellow fragrance freaks, you may have read it too, back in the day, before you discovered olfactory phantasmagoria but hey, trust me, you haven’t.
I actually had no idea as to what I would write today. I’ve been busy, distracted, and so on, all the usual excuses. So here we are, having just arrived in real time. All of this rambling is occasioned by my sampling, over the weekend, L’Artisan’s “Nuit de Tubereuse.”
It turned cartwheels on my wrist. I actually think that Pan probably would have liked Amaranthigh, uh, Amaranthine, better, because it’s so much more direct in terms of its massage message, but y’know, Nuit de Tubereuse is purty damned good. I’m not going to rattle off notes here, as you will easily find those in any of the ten to a hundred or so fragrance reviews that either have come out or will, except to say that I love that spice that sneaks in pretty quick, and that the tuberose is sweet but not too sweet, darkish and earthy but not, um, mushroom-y, and yet it’s not all SHRILL like most, and let’s face it, there are some real horror-movie tuberose re-creations out there.
(I’m actually growing tuberose. Trying to anyway. Let’s just say that if the rose is, say, Her Serene Highness Princess Grace, then tuberose is Princess Stephanie before she calmed down. I will let you know how it goes.)
Here’s the other thing. It seems to me that L’Artisan has done this just right. In all my (two) years blogging about perfumes, this launch has been the best, has taken this world, we who are led by our noses , who know what Pan was talking about, seriously.  We have responded in kind -- but the product has the goods. If it didn’t, it wouldn’t have a snowball’s chance in hell, with Those Who Are Not So Easily Fooled.
So here’s what I’m going to do, between attempting to photograph some paintings, trying to keep my cat from eating that roll of blue ribbon -- most assuredly the only blue ribbon this particular cat will ever see -- sharpening my pencils, painting the stair railing and, oh, yeah, coddling my tuberose plants. I’m going to generously scent one of those little strips of watercolor paper I use for testing fragrance (yeah, yeah, I do it on skin at the same time, too, okay?) with "Nuit de Tubereuse."  And use it as a bookmark in my tattered old copy of “Jitterbug Perfume.”
Oh, alright already! Notes for “Nuit de Tubereuse” include tuberose, cardamom, pepper, clove, citrus, tuberose, orange blossom, ylang-ylang, rose, mango, angelica, gorse, sandalwood, palisander, musks, benzoin and styrax.
Penhaligon’s Amaranthine, also composed by Bernard Duchaufour, include green tea, white freesia, banana tree leaf, coriander, cardamom, rose, carnation, clove, orange blossom, ylang ylang, Egyptian jasmine absolute, musk, vanilla, sandalwood, condensed milk and tonka bean.


Disclosure time: I bought samples of "Nuit de Tubereuse," and had some "Amaranthine" from a bottle split I did awhile back.
“Jitterbug Perfume,” by Tom Robbins, is available in paperback or hardcover, in all the usual places.
Posted by Olfacta at 9:55 AM

I recently read JP, and liked it ok, but I thought Robbins' prose tried a little too hard sometimes.

Great review. I love the idea of cartwheeling perfume! Have fun reading, and good luck with the tuberose!

Here's a secret, unveiled, about the name of my perfume for the upcoming Mystery of Musk project: Kudra.

I already created one for Pan, based on his character in JP ;-)

You liked it much better than I did...all I smell is the orange blossom detergent . I'll gladly swap you my 15 ml decant if you'd like...tom Robbins on the other hand , I read from cover to cover in one night , as soon as it was released . He was the high school English teacher in the town where I lived at that time !

I am so far from a sniff of NdT at the moment...but it was fun having a view, courtesy this post.

Robbins was "Even Cowgirls Get the Blues," read as a rebellion against all the proper postmodern fiction and criticism I had been reading. Turns out it was a way to realign for the shift from one mode to another...

...come to think of it, I'm having a moment here, because I realize that I avoided JP because "perfume" was in the title. I was still in my "ack! perfume = Nana's Avon = strike me with death headache now" era.

Anyway, best wishes with the cat and the ribbon, enjoy the cartwheels, and take an extra huff of your real life tuberose for me. :)

Hi LBV -- I can see that. Maybe it was just more freewheeling times.

I'm honored to be participating in the Musk project as a blogger (and a little nervous)...I have a sample of Pan, too but haven't tried it since I started reading JP. I think I will -- I wondered if the book was your inspiration.

Thanks for the comment, good to see you here!

Hi Carol -- Robbins as a high school English teacher is hard to imagine these days -- I wonder if that could even happen now! I'll be in touch re the swap; thanks!

Hi S -- If the tuberose blooms this year (sometimes it takes two years, I hear, and you have to overwinter the bulbs in a temperate location...I may just buy some more next year, I'm determined to smell the actual, real flower.

Postmodern criticism...yuck. (I guess I'm illiterate.) I know people who love it.

I remember a couple of years they sold cut tuberose in the greengrocers locally. It's intense!
Perfuming the pages of books is one of the pleasures of having a lot of different samples...

Hi L --I'm don't think I've ever seen tuberose at a market, although I'm thinking they may have it in more tropical climates. Based on the fussy performance of mine so far, I'd bet it's pricey.