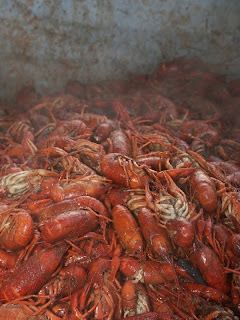 When driving to New Orleans, you begin to smell the base note many miles away. It’s the smell of Swamp. A millennium's worth of muck. Eons of decay.

Does this photo make you recoil? Chances are you won’t like New Orleans.

I used to say that this city wasn’t really part of America, and I still say that. Certainly it wasn’t treated as part of America -- CleanAmerica -- after Katrina, which the Gulf Coast people simply call “The Storm,” as if there hadn’t been and will never be another one like it. It was as though the Powers of the time simply cut the city loose, hoping it would drift out into the Gulf, with its polyglot population, its aura of decadence, its social problems, its reputation as a place one goes to do things one doesn’t do at home; hoping that it would simply sink from their view. But it didn’t. It’s not the same -- will never be -- but it’s still here.

I’ve always loved the place. I’ve been there many times. But it’s not for everyone. If you like tidy, cleaned-up, charming historic districts, try Charleston. Because New Orleans isn’t tidy in any way.

We only had one night and day, this time. Not long. Just long enough to walk a bit, ten blocks here, four there; dinner uptown, one night at my favorite slightly-tattered, musty old hotel -- once a hospital during the Civil War, now reputed to be haunted -- on Chartres Street.

Truth be told, many of the smells of New Orleans aren’t nice.

Old cities, old sewers; it hangs in the air, sweetish and sour, the odor of humanity. It’s always there. You smell it as soon as you get out of the car. There’s garbage, too; piles of it, waiting for the plow, and manure from the horses that pull buggies filled with tourists around the Vieux Carre.

We walked ten blocks or so down Chartres, to a place I had heard had good muffaletas (Italian bread soaked with “olive salad,” or marinated green olives, onions, peppers and garlic, then filled with sliced Italian deli meats -- salami, ham -- and provolone cheese. They’re essential here.) It was around noon. We were famished, and that walk was filled with the steamy smell of seafood boil -- spices, like white pepper, cayenne and thyme, added to cooking water -- and crabs simmering in it. That scent poured out of the restaurants and stands as the city got ready for its (long) lunch break. I could smell shrimp and oysters frying, too. That seafood smell mixes with the swamp and river and the sewers and the garbage, and it is that which is, for me, the quintessential smell of the old Quarter.

Since I began exploring the olfactory world through perfumery, odors that used to bother me don’t any more. Human body odor, for example. There’s lots of that in the Vieux Carre -- street performers, many of them shockingly young, who clearly don’t get to bathe enough, and hawkers, and frat boys on Bourbon Street benders. It’s the smell of living. Lots of that here.

For me, the first extra-spicy Bloody Mary and the first cup of gumbo makes me feel at home. Gumbo is New Orleans in a bowl. I’ve heard that many places almost never start it from scratch. They just keep adding to the pot, which never has a chance to get cold. There’s the dark roux, a paste of flour and oil which must be cooked only to a specific point, or it’ll “break” -- separate. Then comes the “trinity” of Creole cooking, onion, celery and green pepper simmered only until limp. Then stock, all kinds, seafood, chicken, fish; okra, to thicken it, and sometimes the cayenne-hot Andouille sausage. Then, the cook adds whatever makes it his, or hers -- spices, crawfish, shrimp, chicken, oysters, sausage, you name it, and it simmers for hours. The resulting brew is thick and dark as mud. And then it is finished with file powder, made from ground sassafras leaves, added only at the last moment, and only to the individual bowl, as direct heat makes it “ropy.” I smelled the file this time like I never have before. A little pine, a little citrus, a little camphor. A perfume.

There are two perfumeries in the Vieux Carre, both old and historic. (I can’t think of any place on earth where perfumes would have been more necessary than here.) They are Hove and Bourbon French, and, since it was Sunday, both were closed. I’d planned to visit them on Monday, but a storm was blowing in from the Gulf, the schools were closing, and we decided we’d better get out.

Not to worry. There will be many next times. And the perfumeries, like New Orleans, will still be there.

Wonderful travelogue! I love your writing - as in, I'd buy any book you wrote! You're that good.

Donna, you are SO right !

I can't describe the pleasure I derived from this fabulous post.

I'm in! You did a lovely job of capturing the intricate, imperfect beauty of NOLA.

Sorry I've been so slow to get over here and read your great NOLA post. It is an olfactory treasure of a city, that's for sure. I haven't been back for a whole year, and I'm dying to get there. I keep dreaming about organizing a New Orleans perfume gathering. Think we could do it?

PS. Which hotel on Chartres? The Richelieu?

Lovely post - great city! I am moving there in a few months to write...about perfume! When I think of New Orleans, I think of the smell of burning leaves as the St. Charles street car makes its way down the avenue, or the old bar smell of the Napoleon House combined with the herbs and cucumbers from a freshly made Pimm's Cup...