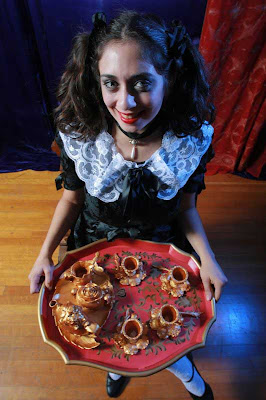 Like many of you, I've been amassing samples lately. Swaps, freebies, kind 'fumebuds...you know. And it's not as though I haven't wanted to try them. I mean, I have tried some of them. At night, before going to sleep...and in the morning I'm thinking, now what did that one smell like?

It's just that Olfacta has been distracted lately. Taking a course that actually requires outside reading and work. Not that anybody else actually does much, but hey, I always was the kid in school that showed up each September with a spanking new notebook and a handful of sharpened pencils. Anyway it's almost over, so.

If you do a lot of swapping, then you know that it's Basic Swap Etiquette to throw in a couple of "extras." Add that to the free-with-purchase handful you get from the niche sellers and you're talking about a very fine candy haul. So, I did a customized trick or treat. I put them all in a bag and picked five at random (no peeking, honest) and am having myself one fine little Halloween party.

Remember, though, how you'd trade the Halloween candy? For example, a peanut butter cup for your brother's miniature bar of chocolate? If I could trade one of the five, which one would it be? So here goes: my random candy.

Parfums Del Rae Amoureuse: This reminds me of Stargazer lilies, a flower I often see at Christmas, with its creamy white petals, red dots, orange stamens and heavy, hammy fragrance. Amoureuse opens a little sharp with tangerine -- a difficult note for me -- but drifts into an unusual floral mix. It's notable for the skill with which perfumer Michael Roudnitska used the divas, jasmine and tuberose, but somehow kept them from knocking the rest of the cast off the stage. The meaty note I detect must be from the ginger lily and, especially, the honey. I'd call this a honey fragrance. And, honey, it ain't shy. Not an office scent, but who cares?

Juliette Has a Gun Citizen Queen: I'm playing corporate wife at the company's holiday party. The boss's (third) wife approaches. "Ummm, you smell good," she says. "Is that Chanel?"

The point is that unless this sample is mislabled, I don't get the brand's danger-gal imagery here, because this is appropriate for a Queen of the noble variety, or any variety. It's a lovely floral, a "modern chypre" (a term which usually reminds me only of what we've lost) with rose, and amber, a little musk, a little powder, some aldehydes, a little violet. Ok, it is not a background scent but, applied sparingly, it could be worn anywhere, by anyone. Perfumer: Romano Ricci.

Parfums de Nicolai Cologne Solange: A most serviceable, if not unique, summertime cologne, with the usual suspects: neroli, sandalwood, grapefruit, lemon verbena, Sicilian bergamot. On me, the neroli predominates, which makes it a little sweeter than, say, 4711. What's not to like? And it's relatively inexpensive. The perfumer is Patricia de Nicolai.

Miller Harris L'Air de Rien: Have you ever bought a vintage sweater and realized that, once you've worn it for a few hours, it's exuding the scent of somebody else's B.O.? Not rank old sweat, just someone else's...essence? Not necessarily bad, but not yours? The "official" notes don't tell this story (French oakmoss, Tunisian neroli, sweet musk, amber, vanilla). C'mon, MH! This is a sweet and dirty lowdown musk. It's really captivating, if you like that kind of thing, but be warned. Perfumer: Lyn Harris.

Ormonde Jayne Frangipani: OMG. This is a cool lei around your neck on a hot Hawaiian day, made of linden flowers, white frangipani, a few orchids...it's a green-tinged, just-this-side-of-plum tropical floral, but there is nothing cloying or heavy here. Other "notes" include magnolia, lime, rose, tuberose, water lily, amber, musk and cedar. Mixed with consummate skill. The perfumer is Linda Pilkington of Ormonde Jayne.

Of all of these, I suppose I'd be most likely to trade the Cologne Solange, because, nice as it is, it's not a standout. But for someone who doesn't already have five or ten citrus-based summer scents, this just might be The One.

Full disclosure: The Ormonde Jayne Frangipani sample was part of a set I got courtesy of Ormonde Jayne after "Olfactarama" appeared on Fragrantica.

Hey Pat !
The perfumer for Ormond Jayne is Pilkington...Sniffa visited with her in London . She's very petite...I can't wear any of her frags...they are stuffed with iso-E-super and I can't stand it .

Hi Carol -- I've usually got a pretty good nose for IEs, but really didn't detect any in this one, it smells purely floral to me without being sweet. I'll change the text so it reflects her name. Thans!

I'm trick-or-treating in YOUR neighborhood! (gonna set up an Atlanta sniffa cocktail hour next month, will you join in?)

Yes, count me in! PM me through POL or email at olfactarama@gmail.com with details.

Ah, Amoureuse...there's something about how thick this one is...you know how when you cook certain kinds of sauces too much, they get gritty? granular? Maybe what is meaty for you is what literally rolls around on my tongue. It is THERE, baby; you're right, not shy at all.

One thing I love about teaching, when I do, is that you get to indulge that new paper/notebook/pencils ritual. I hope you are enjoying your class; I'm sure your class is enjoying you. :)

P.S. Have fun with your local sniff-fest; shout out to Vida!