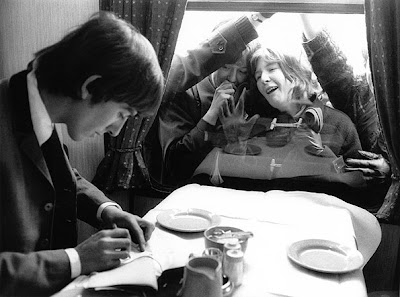 I don’t know if you saw Martin Scorcese’s two-part documentary about George Harrison that was on HBO recently, but I did, and have rarely seen anything so affecting. The next day I was poking around the web looking for another photo and I came across this one.
He’s about twenty here, I think. Twenty.  A twenty-year-old man, er, boy. Now imagine the train car’s corridor — the viewer’s POV — filled with shoving, hustling photographers; blinding flashbulbs, buzzes and clicks. And then his face: the taking-it-all-in-stride studied nonchalance betrayed by his own clenched jaw. He was just a kid, when this was taken, one who grew up without indoor plumbing.
I wonder about the girl, too. What she’s doing now. Probably someone’s grandmother. Does she know this photo exists?
I was too young to understand the armies of screaming girls surrounding the Beatles. Not hormonal yet, or something. I do remember Harrison’s face, the intense, nearly black, eyes, the sense he always seemed to have of being present, in those moments of insanity, but not really there. And then, what came later, the mysticism, the Maharishi, Layla, the landed eccentricity, his sad early death.
What does this photo say to you?
I have searched in vain for a photo credit here. This looks like a photo from Life, but an hour or so spent viewing their Beatles photos has come up nil. If anyone out there knows, please tell me! I’d love to offer proper credit.
Posted by Olfacta at 10:33 AM

I haven't seen this yet, but recently ordered the Beatles Anthology DVD set for Christmas. Can't wait to watch that!

I liked what Scorsese did with No Direction Home on Bob Dylan, so reckon this one is sure to be compelling too.

I haven't seen that yet - I love love LOVE George - I get all lovesick when I see pictures of him, yeah it's that bad!

Ah synchronicity... I just borrowed a bunch of Beatles CD's from my brother to burn, and have them by my computer. I've actually run into 20-somethings that have never heard of the Beatles! That's like having never heard of Jesus or Marie Antoinette or Edison!

Great post as always, and you've left me with nothing more to say on that picture. You've said it all very eloquently.

I've never understood the desire for fame. I'm not sure I would have wished the Beatles' life on my worst enemy. Poor boy looks like an animal might feel in a zoo. I am amazed at the combined talent though and awe-struck that the youth doesn't know who they are. With all the new technology, and endless information at your fingertips, I can't see that people are getting any smarter.