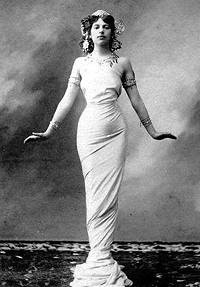 I have been fortunate enough to obtain some vintage Chypre de Coty.

Smelling this perfume has sent me into a frenzy of research and imaginings. There is so much to think about! There’s Paris in 1917, the center of the cultural and intellectual world, giving birth to the modern in its bars, studios, presses and garrets. There’s WWI itself, the most horrible of all wars, still going on, but beginning to turn. There’s Francois Coty himself, born ordinary in Corsica, who founded a worldwide business.

There is a lot of legend surrounding Chypre. Coty’s home, Corsica, has a Mediterranean climate similar to that of Cyprus. In 2004, archaeologists discovered a perfume factory there, of industrial magnitude, four thousand years old. Resins similar to the ones that make up the chypre family of perfumes were found, still in small amorphae, on the site. Reportedly, a perfume of the chypre type was made for Catherine the Great of Russia, around 1880. In fact, there may have been as many as nine previous chypre-based perfumes before Coty released his, in 1917 Paris, a year of bitter cold, epidemics, bombings, shortages, the Bolshevik revolution, and, incidentally, the execution for treason of the infamous dancer/courtesan/spy Mata Hari (pictured).

While it would be tempting to believe that Coty, generally credited with this first modernist scent, was a perfumer/artist hanging out in the cafes with Apollinaire, Picasso and Cocteau, he was in fact a businessman. He started by selling flower-based essences to Paris barbers, took training at Grasse, and started his company with a small loan from his grandfather. He didn’t have much luck at first. Then, a bottle of one of his earlier perfumes broke after falling from a store shelf, filling the store with its scent, and soon sold out. Did he drop the bottle on the floor to demonstrate the appeal of his new product, as is sometimes reported? Probably not. In all likelihood, it was an accident.

But Coty had a good, if not utterly new, idea. If he was to combine the labdanum resin of Cyprus with the inedible but oddly floral Mediterranean fruit, bergamot, and then add the fungus oak moss to the rose/jasmine florals that had been perfuming French boudoirs and bosoms for centuries -- and then add some other stuff (possibly lemon, storax; the formulas vary) -- he could bottle it simply but beautifully, and sell it for a reasonable price.

Luca Turin has called Chypre “an abstract idea,” and it was, in the sense of re-creating a place-memory through scent-memory. Cyprus is full of rocks, dry dirt and the unrelenting heat that produces rich, aromatic resins in the plants hardy enough to survive there. Oak moss, a parasitic fungus, absorbs the strength of the massive tree, and has been known as a fixative for centuries.

Modernism in general was all about leaving behind the tidy Victorian positivism and sense of the inevitability of progress, and replacing it with the blunt and brutal “life force,” which would then force vitality in all forms of expression. Given the carnage and nihilism of WWI, that seems inevitable. And Chypre was not Victorian in any way. Concurrent and complimentary to the burgeoning cultural upheaval all around, it was a powerhouse perfume designed to be worn by modern women. (The writer Dorothy Parker was reported to have trailed clouds of it wherever she went.)

Although Coty Chypre is discontinued now, the classification “chypre” lives on in the name of a perfume family, based on that same oak moss/labdanum/bergamot trinity that has been disparaged in recent years as an “old-lady” scent. Puh-leeez! Kids, there is nothing old-lady about it.

There’s talk that the chypres will return to general popularity, now that the smell-like-nothing fragrances of the 90’s and the Barbielike fruity/florals of recent years are fading.

Unfortunately, they will never be quite the same, but neither will we.

My sample of Coty’s Chypre is from the seventies. There had been some reformulation, but the oak moss base was still intact at that time.

Chypre by Coty turns up occasionally on Ebay. Other good examples of the chypre type are Miss Dior, Bandit, Cabochard, Givenchy III, Mitsouko and Jolie Madame. As with all older perfumes, the vintage versions feature the aromatic chypre base, which has been much degraded in recent years by EU regulations (oak moss gave somebody a rash once) and corporate cost-control measures.

Pat, I'm furiously researching chypres too after receiving your lovely sample!! thanks so much for this post!