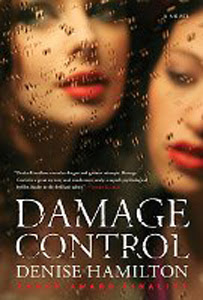 “We’re the number that movie stars have on speed dial when they get caught buying heroin or transvestite hookers on the wrong end of Sunset….We tell clients whom to talk to, when to go to rehab, what emotions to show (remorse, sorrow, sincerity, guilt, humility).” — Maggie Silver, heroine of “Damage Control”
This is a terrific read. I’m not a mystery fan, particularly, as I think that so often the characters exist simply to move the plot along. These characters, though, are like real people, except that “real” hardly applies to them. They exist in a Los Angeles most of us will never experience or even see. These are the dwellers of hilltop homes with ocean views, entrance gates, and secrets.
Maggie Silver is an up-and-comer in the army of  highly paid servants, members of a large group — the lawyers, accountants, managers, trainers, personal assistants and many others — who protect the rich and famous, often from themselves.
In an interview with Carolyn Kellogg of the L.A. Times, author Denise Hamilton says that she “wanted someone who’d be in that world and yet not of it.” That’s what Maggie Silver is. Once, at sixteen, she reinvented herself  (Encino, not North Hollywood; deceased father a golden-age screenwriter, not barfly) to be accepted by the gilded Paxton family after she became pals with their daughter, Annabelle. But she and Annabelle have been apart for many years, and now Maggie is a rising star at The Blair Company, a firm that does damage control. Annabelle’s father, a distinguished U.S. Senator, is in trouble. One of his assistants, a beautiful young woman, has been murdered. The tabloid press is circling him. So Maggie and the Paxtons meet again.
Lots of us in perfume circles are familiar with Denise Hamilton. She writes the perfume column of the L.A. Times, and pops up regularly on perfume sites and fora. The novel is peppered with familiar names -- Vol de Nuit, Sycomore, Chergui -- and rationalizations ("If it makes you feel rich as a duchess, keep it.") A classic scent even provides the final clue, which only Maggie, with her keen nose, would “get,” and she does. It’s fun, reading the perfume references, although the author has apparently realized that the perfume blogosphere is a small world, and uses them skillfully.
The real appeal of this book, at least for me, is its dead-on look at modern Los Angeles. Hamilton knows the territory; the downbeat surf culture she has called “surf noir” where, on certain beaches, used syringes and condoms are as common as kelp. But she also roams the immigrant neighborhoods in search of, say, Peruvian food and back-street thrift shops. Her own life includes a crushing mortgage on a crackerbox house in an iffy neighborhood, and caring for a mother recovering from cancer.  In other word, she needs her job. Needs to remain sharp so badly that she has a growing smart-drug addiction. So badly that, as she begins to realize that The Blair Company does more — a lot more — than simple PR to protect its clients, she tries to reason it all away. She, as an employee of Blair, is spawn of the sizzling 24-hour celebrity-worshiping culture that defines us now.
The first few chapters of “Damage Control” are Chandleresque in their description of this dark Los Angeles. They’re as good as anything I’ve ever read about the city. The rest of the book is devoted to Maggie’s unraveling the plot, in mystery-novel tradition, full of dialogue and subterfuge. I kept thinking about what a good movie this book might make. What meaty characters these are, all of them, from street-smart but troubled Maggie to blanked-out fortunate daughter Annabelle to Maggie’s shoulda-been-in-the-CIA boss Faraday to Mr. Blair himself, a self-invented P.R. Zen Holy Man that could only exist here and who, incidentally, serves Maggie civet cat-shit coffee — of course we in the know know what that is; the uninitiated will probably think Hamilton made it up.
So yeah, get this book. I think you’ll all like it.
If you don’t mind receiving a used copy (with only one user: me) leave a comment by midnight US Eastern Daylight Time, Monday, October 17th. I’ll do a random drawing and announce the winner on Tuesday, October 18th.
Full Disclosure Time: This book was sent to me by a P.R. company working for the publisher, Scribner, after I answered an inquiry asking if I’d like to review it. “Damage Control” is out now and is available where books are sold, ISBN 978-0-7432-9674-8, and as an e-book (ISBN 978-1-4516-2789-3).
The image is a scan of the cover of “Damage Control,” jacket design by Chika Azuma and jacket photograph ©Allan Jenkins.
Posted by Olfacta at 2:34 PM

This sounds like a fun read! Thanks for the giveaway!

Sounds like a great read! Please enter me in the drawing.

This sounds like my kind of book all right - I am a big crime fan and particularly favour novels set in Canada and America. "Dark underbelly"? Bring it on!

Ooooo count me in! I need an entertaining, fast read.

Well, if you're not a mystery fan and you think this is a great read, what is a mere genre guzzler to do? "Surf noir" sounds fascinating, even without any perfume references, so count me in for the draw. Thanks.

I have a copy of this book and still reading until today. :D